The Weaving Mothers for A Better Future [Indonesia Design] 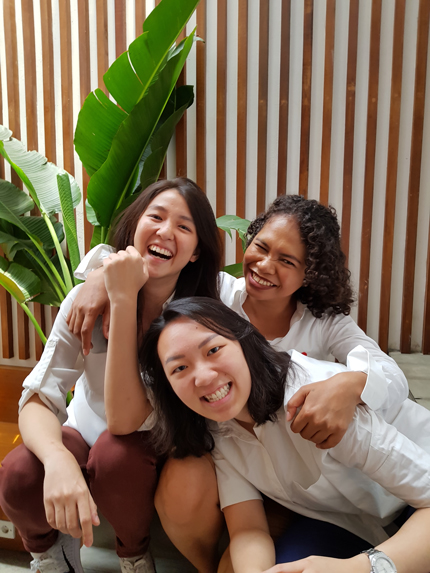 As featured on Indonesia Design, 17 August 2018, by Vira Tanka

With hearts on social welfare and eyes for aesthetics, three best friends Azalea Ayuningtyas, Melia Winata and Yohanna Keraf, founded a social enterprise called Du’Anyam. Its wicker crafts have helped to empower many women weavers in Flores, and now expanding to more areas in Indonesia while creating good designs and preserving the traditional crafts.

The name Du’Anyam derives from du’a, which means mother in local Flores language, and anyam, which means weaving in Indonesian. Du’Anyam was founded in 2014 out of the concern of a high maternal and children mortality in Flores. Seeing the potential of Flores’ almost dying wicker crafts, the team decided to incorporate the artistry into an effort of improving the health of the local women, especially those of childbearing age.

The wicker crafts in Flores use palmyra leaves as the raw material, which grow abundantly in the area. A special characteristic of Flores wicker crafts is the hexagonal weaving pattern, which applies on Du’Anyam baskets, trays and bags. Sobe, one of Du’Anyam’s best selling items, incorporates three-dimensional weaving pattern, where the leaves are twisted and reinserted to create the motifs. In creating the design, the Du’Anyam team gives added values and new functions to the products, while sticking to the traditional design as much as possible.

The weaving skill has been passed through generations, but it was not popular amongst the young generation as it did not generate a decent earning. The Du’Anyam team works with women in 17 villages across Flores for the wicker production and opened access for distribution and sales. So far, the project has empowered 450 women to gain a sustainable income, which increased their access to health facilities for themselves and the children.

Du’Anyam is looking to expand to more areas. Early in 2018, it started the same project in Berau, Kalimantan, which has a similar health issue. The crafts here use rattan as the main material. One of the designs is a modification of a bag for carrying goods and crops, now turned into an umbrella stand that is combined with bamboo and brass for a more modern look.

Many of Du’Anyam’s customers are individuals and corporates in Indonesia, but it has also exported to Korea, Japan, Australia and the US. It is now looking to spread its wings to the European market after getting good responses at the exhibition of Salone del Mobile in Milan earlier this year. Du’Anyam is also proud to be selected as the only craft based company as an official merchandiser of Asian Games 2018, producing wicker straw hats, handled fans, bag tags, cup sleeves, bookmarks and other small souvenirs.

A good design is a sustainable one. Du’Anyam does not only create functional products with sustainable materials, but also a sustainable financial system for the women weavers in a few areas in Indonesia. It is a breath of fresh air to know there is an enterprise with a mission to improve welfare of the women while keeping the traditional culture alive in a good design package.